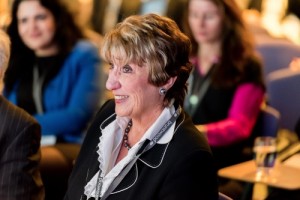 The achievement recognises Jennifer's tireless dedication and commitment to the UK flexible workspace movement, and the significant strides that she has taken to raise industry standards since stepping into the role in 1999.

As a special guest of WANY, an industry trade and quality standards organisation in New York, Jennifer attended the organisation's Conference to receive her award and also to mark the 50th anniversary of the first U.S. executive suite business center.

Fittingly, the award was presented by David Kinnaird, a former BCA Member and regular MC at past BCA Conferences, prior to his appointment as President at essensys U.S. and subsequent relocation in 2015.

Whilst in the U.S., Jennifer has been working alongside WANY and other recognised industry bodies as part of a joint effort to uphold high standards of flexible workspace and to continue raising awareness of this fast-growing and diversifying market.

Back in the UK, the BCA is preparing to launch its latest in-depth research review into the UK industry. This valuable study, the second of its kind commissioned by the BCA and this year conducted by CBRE, shows that the UK flexible workspace sector alone is worth an astonishing £2.5 billion, with further growth expected over the coming years.

The impending launch of this anticipated research, combined with Jennifer's achievement and the 50th anniversary of the U.S. industry, mark a very important pinnacle in the evolution of the flexible workspace industry on both sides of the Atlantic, and across the world. The BCA is proud to support this global movement and to join industry delegates on this very special occasion