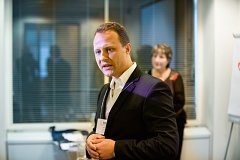 Last week’s Beyond Networking meeting in Central London was packed out as speakers highlighted exciting developments and opportunities both for the local region and flexible space operators across the UK.

Welcoming delegates to the event, essensys VP Sales Mike Guest urged the audience to take every opportunity to network with colleagues, peers, suppliers and competitors.

He added that networking was a key theme of the essensys conference, held 4th October,

“The power of the network creates an incredible opportunity for us all to come together and discuss how to add value for clients,' said Mike.

Chris Meredith, UK head of sales Officebroker.com gave an upbeat market report for central London,
which is experiencing strong growth in contrast to most other parts of the UK. He explained that the
average price of a workstation has now returned to, or in some cases exceeded, 2008 levels when the market was at its peak.

Locations within W1 are showing the strongest performance. Here the average price of a workstation is £712 (compared to £666 in 2008). The SE1 postcode is also performing well, particularly around London Bridge and Waterloo. However, in SW1 prices are still somewhat below their level four years ago.

The recovery of prices is all the more impressive because the number of locations has grown exponentially in the past four years: In 2008 there were 131 locations in central London. This year there are 266 Operators, well established in the region and expanding their portfolios, whilst an increasing number of new providers are venturing into the central London market.

“As an industry we now have to realise the true value of our sector.

We all have a greater understanding of what we can offer and brokers and operators need to work together to highlight the strengths of serviced office space to clients from a long-term perspective.” said Chris.

Having listened to feedback from BCA members, the team at Officebroker.com has pledged to visit as many BCA locations as possible. At present the team has visited 25 per cent of BCA locations.

“We have visited 95 per cent of BCA operators. We aim to visit all BCA operators and to see as many locations as we can.”

NearDesk, which has launched a pay-as-you-go style card to enable co-working in multiple locations, presented an entertaining video that illustrated the global phenomenon of co-working.

This is a fast expanding market which has grown by 400 per cent in the past two years.