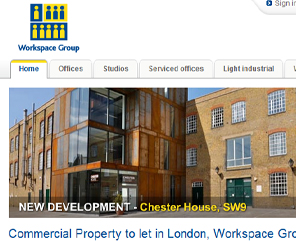 Workspace Group PLC has today announced its results for the six months ended 30 September 2011.   The Company provides space to some 4,000 small and medium sized enterprises across London.

·     Overall occupancy including refurbishment and redevelopment properties increased to 85.2% (83.6% at March 2011)

"During the period we have successfully driven occupancy and rent roll and accelerated our programme of refurbishment and repositioning initiatives.  We have also achieved good increases in property values without any benefit from yield movement.

We are mindful of the broader economic environment but continue to see, since the half year end, good customer demand and positive KPI's.  Further, our intensive management model enables us to respond quickly to both opportunity and challenges. With a strong balance sheet, experienced management team and attractive London property portfolio Workspace is well positioned for further growth."

"Workspace is a well managed business, soundly financed with a clear strategy.  The immediate priority is to ensure delivery of our plans set out at the time of our rights issue in July; we are making good progress here.  Given the trading results and positive lead indicators, we have increased the interim dividend by 10% to 2.93p per share, payable in February 2012.

We are in the process of appointing a replacement for Harry as Chief Executive and expect to be in a position to announce his successor early in the New Year and so ensure an orderly transition during the first half of 2012."