The new iPad is here 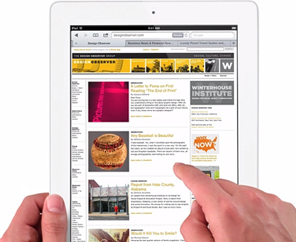 iPad with Wi-Fi + 4G connects to fast networks worldwide, including AT&T’s and Verizon’s 4G LTE networks, and still delivers the same all-day 10 hour battery life* while remaining amazingly thin and light. Beginning today, iPad 2 will be offered at an even more affordable price starting at just $399.

“The new iPad redefines the category Apple created less than two years ago, delivering the most amazing experience people have ever had with technology,” said Philip Schiller, Apple’s senior vice president of Worldwide Marketing. “The new iPad now has the highest resolution display ever seen on a mobile device with 3.1 million pixels, delivering razor sharp text and unbelievable detail in photos and videos.”

The new iPad’s Retina display delivers four times the number of pixels of iPad 2, so dense that the human eye is unable to distinguish individual pixels when held at a normal distance, making web pages, text, images and video look incredibly sharp and realistic.

The 3.1 million pixels in the Retina display are more than one million more pixels than an HD TV, and with 44 percent increased color saturation the new iPad displays colors that are unbelievably richer, deeper and more vivid. Movies are now capable of playing at full 1080p HD-resolution, delivering an incomparable viewing experience on a mobile device.

Images can be enjoyed on the large Retina display, then edited, enhanced and easily shared with friends and family using the built-in Photos app on iPad.

iPad Wi-Fi + 4G with built-in next generation 4G LTE has the most comprehensive support for fast networks worldwide including HSPA+ and DC-HSDPA, and now both CDMA and GSM iPad users have the ability to easily roam internationally. The world-ready iPad delivers blazing download and upload speeds so web pages load incredibly quickly and email with large attachments can be sent and received easily. Personal Hotspot can be used to share the fast network connection on your iPad with up to 5 other devices using Wi-Fi, Bluetooth or USB**.

With iOS 5.1, the latest update to the world’s most advanced mobile operating system, the new iPad has a number of new features and enhancements including: a redesigned Camera app with video stabilization technology; the ability to delete photos from Photo Stream; support for dictation in English, French, German and Japanese; and Personal Hotspot. iOS 5.1 also works seamlessly with iCloud®, a breakthrough set of free cloud services including iTunes® in the Cloud, Photo Stream and Documents in the Cloud, that works seamlessly with your iPhone®, iPad, iPod touch®, Mac® or PC to automatically and wirelessly store your content and push it to your devices. When content changes on one of your devices, your other devices are updated automatically.

The new iPad also supports dictation, another amazing way to get things done just using your voice. Instead of typing, tap the microphone icon on the keyboard, then say what you want to say and the new iPad listens. Tap done, and iPad converts your words into text. You can use dictation to write messages, take notes, search the web and more. Dictation also works with third-party apps, so you can update your Facebook status, tweet, or write Instagram captions.

Apple also introduced the iPhoto® app, along with major