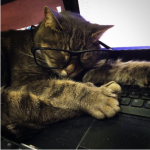 OK so, let’s start at the beginning with one simple question: Can you honestly recall the year that you first sent an e-mail?

Like water from the tap, gas central heating or electricity to power the room, internet connectivity is now one of the major business utilities and if you don’t believe me, just try working for one day without it.

But check out these statistics: amazingly for a so-called utility, 15% of the total traffic on the internet is Cat themed, with some 3.8 million cat pictures or videos shared daily.

It’s no accident therefore that here at ip-Xchange we chose Mojo as the name for our user friendly client interface. You see, ‘Mojo’ - despite all its positive connotations - is also the name of our office cat, he even has his own Instagram page: http://instagram.com/mojomenow/. And this year he received his first unsolicited Christmas card from a lady in Canada who loves his ‘cute’ pictures but quite obviously has never met him.

This utility therefore is clearly unlike any other.

86% of us now use the internet for maps. Who hasn’t used Google maps to calculate a mileage claim? 80% of us regularly use the internet for checking the weather, presumably, for where one is going, or alternatively where one is coming from, or more likely probably both, and then when we get there, whether or not it’s going to be raining cats and dogs (see what I did there?)

Not at all surprisingly and topping the chart at 92% is the business of sending and receiving e-mails, work and personal, which leads me back to my opening question: when exactly did you first send an e-mail?

If you were born after 1995, then you’ve always had this technology at your fingertips and I imagine that even asking the question is, err, stupid? So 1995 is about the time sending and receiving e-mails started to become more than just geek territory. At that time, and completely unaware to the general population, we were midst the information age revolution.

20 years later and it’s just not hardcore anymore, my Mum has an iPad and constantly complains about connectivity speeds, this is the same woman who used to shout at me to “Get off that bloody computer” in the same way John Lennon’s aunt Mimi said “The guitar’s alright John but you’ll never make any money playing it.”

In this instance the statistics don’t lie. Internet use is massively on the increase and enabling your centres is key to securing high occupancy and profitability.

Some good news recently announced is the extension of the government's Connected Cities scheme from March 2015 to March 2016, and there’s £40million worth of financial support to be had, so it’s worth a fresh look and that leads me to a second question: exactly how fast is the connection in your centre? Ask one of your clients before reading the answer below.