Is this "Regus Re-Boot" the Workspace of the Future? 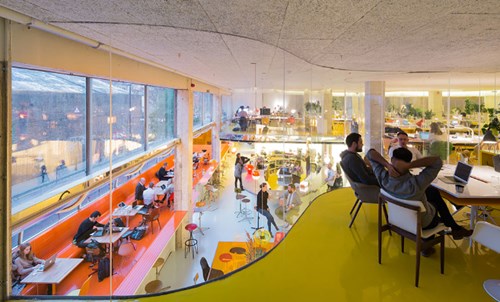 Envisioning the office of the future is a favourite topic of discussion amongst flexible workspace operators. It's also a hot topic throughout the wider commercial property sector and the business world in general. After all, it affects every one of us - and whoever delivers the successful formula stands to gain a significant windfall.

Theory aside, we'll never really know what the future holds until we get there. But some remarkable individuals are already boldly delivering what they believe is a failsafe future formula - and they've got the backing to make it happen.

One such visionary is Rohan Silva, co-founder of shared office facility Second Home in Spitalfields, London.

New shared workspaces are nothing new, especially those in close proximity to Shoreditch and London's tech central. Yet Silva's approach is enlightening. In an interview with Simon Duke for the Sunday Times (30th October 2016), Silva describes his two-year-old startup as "the future of work" and, according to Duke, Silva "harbours higher ambitions than merely re-booting the workspace giant, Regus, for the digital era".

Practically speaking, Second Home ticks off many of the same essentials you'll find within any other flexible workspace. It has shared space, private space, desks and good coffee. Yet what really sells it is the culture. It's described as an 'outpost', a creative workspace and a cultural venue rather than the more commonly accepted term, coworking.

Indeed, 'coworking' is omitted not just from the interview but also from Second Home's website. Instead the content revolves around "creative collisions" and a "carefully curated community" of people.

(As a sidenote, Second Home doesn't completely disassociate itself from coworking - that would be unwise from a marketing perspective. Enter a search for 'Spitalfields coworking' and Second Home appears on the first page of results.)

Terminology aside, we've discussed many times before the blurring of lines between work and home, with terms such as 'third place' working now a common part of the business vocabulary. Second Home takes this concept further, introducing design-led workspace with curvy furniture (because "there are no straight lines in nature") and an environmentally-friendly approach, featuring 100% green energy throughout the building and "next-generation materials" to minimise their carbon footprint.

With a mindful focus on community and people, it could very well be a second home - and investors are readily buying into the idea. Silva, along with his business partner Sam Aldenton, have just raised £20million from the likes of venture capitalist Robin Klein, Time Out owner Peter Dubens and ITV chairman Sir Peter Bazalgette, among others.

Whether or not you think Second Home really is the 'future office', or whether it's just another well-funded version of WeWork, there's no denying its early successes. The space is attracting a healthy mix of startups alongside project teams from corporate giant EY. Despite sitting at opposite ends of the corporate spectrum, these members are able to meet in the middle thanks to Second Home's "creative collisions".

The trick here is marketing. Second Home recognises its strengths and what its members are looking for. Where Millennials are concerned, it's not about long-term leases or jobs for life. It's a place to fuel creativity, to inspire, and to make the mind tick. For corporates, they're looking for a direct line into that fresh flowing creative juice.

Of course not every business wants a shared workspace with transparent walls and yoga classes. But there is a sizeable portion that do - and as we've seen with Second Home, not to mention WeWork, leading entrepreneurs and investors are willing to bet millions that others will follow suit.

With collaboration and community at its core, Second Home is where the heart is. Its secret sauce is driving workspace innovation and shaking up the tried-and-tested coworking formula. And with big-name investors yet again putting their money behind the power of collaboration, Second Home's workspace re-boot could well shape the office of the very near future.