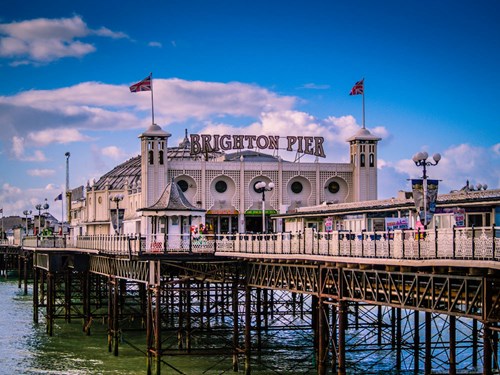 Flexible workspace trends have a propensity to reflect entrepreneurial developments at regional level and on a much wider national scale, too. Research that analyses patterns within the flexible workspace industry, such as the BCA’s annual industry report, offers a valuable insight into commercial and technological trends and their impact on the UK economy.

Whilst Brighton may seem an unusual candidate, especially ahead of such business powerhouses as Manchester (2nd place), Birmingham (7th) and Edinburgh (10th), John Williams, Head of Marketing at Instant Offices, believes entrepreneurs are increasingly “seeking a more relaxed alternative” to London.

“I can understand the appeal of Brighton and the south coast of England -- it is a bit of an antidote to the hustle and bustle of the capital while possessing a strong, creative industry.”

Furthermore, Instant’s research isn’t the only resource to favour culture-rich coastal cities over the capital.

A new study commissioned by accounting provider Intuit Quickbooks suggests that Southampton is the best place to operate as a self-employed entrepreneur in Britain.

Interestingly, both studies appear to favour coastal and cultural-rich cities for small business owners, which may suggest that the work/life pendulum is once again swinging towards lifestyle choices -- a decision that is made possible thanks to the presence of regional flexible workspace.

“We have seen record demand for office space in Brighton and also a large increase in the number of operators trying to set up space in the city to cater for its growing business community,” John added.

With regard to startups, every city featured on Instant’s Entrepreneurial Index has seen a significant increase in the number of new businesses between February 2016 - February 2017.

The most notable increases took place in the Midlands (Birmingham, Nottingham and Leicester), the North West (Manchester and Liverpool), Glasgow in Scotland, and Bristol in the South West.

In a positive show of confidence for the UK amidst ongoing Brexit negotiations, Instant referenced the UK’s impressive ranking of 8th against 137 other countries in the Global Entrepreneurship Index (GEI) for its healthy entrepreneurial ecosystem.

A separate report by the Centre for Entrepreneurs found that a record amount of startup businesses launched in the UK in the last year -- a trend that shows no sign of slowing down.

In addition, London came out top in the European Digital City Index for the second year in a row in 2016, with the UK capital named the best city in Europe for digital entrepreneurship and startups.

Commenting on these findings, John added: “According to many ranking systems, London has been hailed as the greatest city in the world, with its combination of thriving financial hub, vibrant culture, strong education system and multi-cultural appeal.”

For entrepreneurs, he notes that London is home to a large flexible working scene, which features a long-established serviced office market and a burgeoning coworking scene, delivered by a combination of independent coworking operators and hybrid business centres.

Of course, London also retains the most expensive desk space in the UK and, often, the world, alongside such cities as Hong Kong, New York and Tokyo. Yet despite the exorbitant cost of living and working in the capital, London’s expansive transport infrastructure has enabled entrepreneurs to identify alternative locations in which to start and grow businesses. Instant has identified this trend as a “doughnut” around Central London, with demand focusing on peripheral areas like Kingston, Croydon, Richmond and Harrow.

“London now also boasts a diverse selection of places to work, in a variety of locations that really drive creativity and collaboration,” John added. “You cannot put a price on its vibrancy and the collective buzz that drives business, perhaps more than in any other time in its wonderful history.”