HS2 gets the green light. Do you think it will help UK business?

HS2 looks very likely to go ahead after the Government has made a decision to continue with its plans for a high speed rail network, after an announcement by Transport Secretary, Justine Greening.

The big surprise is that there will be a direct link between the existing Channel Tunnel line and the new route to Birmingham.

The new trains will be able to reach London from Birmingham in just 49 minutes, as opposed to the current  1hr 24 minutes on the current crowded trains.

Justine Greening said "The changes mean that more than half the route will now be mitigated by tunnel or cutting and there will also be a reduction in the impacts on people, communities, ancient woodlands and heritage sites

"This is not in any way a vanity project, this is a key and vital investment in Britain's future”.

Dr Richard Wellings, deputy editorial director at the Institute of Economic Affairs said "The Government is ploughing ahead with a hugely expensive project whose economic case is flawed, whose time-savings claims are dubious and whose environmental case is highly suspect.

"After the Government made such political capital out of opposing a third runway at Heathrow, one can only assume it is forging ahead in the face of such criticism as a way of saving face.

"This project will do nothing to bridge the North-South divide and will instead burden the ever-hammered taxpayer with the task of funding what is a classic white elephant." 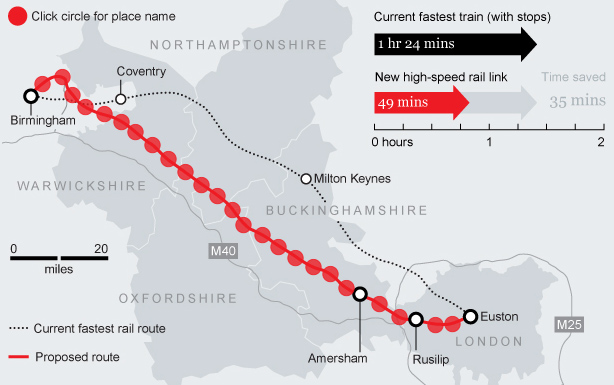