Homes of the Future: Living in a bubble? 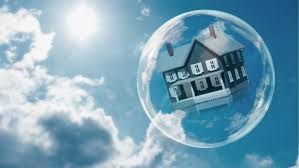 In the wake of the Government releasing its vision of the future for housing in the UK, in the form of the Housing White Paper, and with the background of an acknowledged housing shortage, we take a look at what kind of weird and wonderful environments we might be living, and working in, one day.

Some people have been speculating for a while now, that the UK housing bubble could burst at any time.    But what if you could live, and work, in an actual bubble?

Rohan Silva, entrepreneur and co-founder of Second Home, created the award-winning Spitalfields workspace, which offers an environment based on innovation at the highest level and provides a home to some of the most creative companies in London.   This striking London building has a bright orange, curved facade that wraps around the collaborative workspace within, in bubble-like acrylic walls. Offices are distributed across two floors and separated with bubble-like plastic partitions.

Second Home was also instrumental in the creation of Second Dome, originally created for the London-based workspace provider to host a business and technology event in 2016.  Second Dome was designed by Madrid-based studio DOSIS, which is run by husband-and-wife team Isabel Collado and Ignacio Peydro.

Describing their creation, they said:

"Pneumatic structures are unique – no other type of structure can be assembled so quickly and also have the capacity to span large areas with a thickness of less than a millimetre.

It is a technologic artefact that automatically responds to wind and pressure and that needs extremely low quantities of energy for fabrication and assembly."

Living in a Bubble

It is not just the workspace industry which can utilise this technology to its advantage and create the most innovative solutions to maximise the use of space, architects looking to the future are also experimenting with this technology as a solution to increasing housing capacity problems.

In the future, we could see our living spaces become increasingly flexible, just as the workspace industry has evolved, so will our homes.   Rooms could serve many different functions, walls, floors and even ceilings will have embedded technology which will allow them to change position depending on the activity and space required.

And if we run out of above ground, there is always the other 70% of Earth’s surface to explore.  For five years now, the Seasteading Institute has been working toward building Artisanolopolis, a floating city that runs on solar and hydroelectric power.

Some designers are even looking at the potential of living under the sea.  According to a forecast in the SmartThings Future Living Report, in 100 years we could be living underwater in what can be described as bubble cities. The report, authored by leading academics and futurologists, explains that these “sub-aquatic communities” could become viable communities as the demand for urban space increases.

And if a life under the ocean waves proves a little too salty, there is always Mars! Last year, NASA accepted more than 165 applications for a Mars habitat designed to protect humans from the harsh elements of the Red Planet.

So, whilst we may be stuck with bricks and mortar for now, architects and urban planners are letting their imaginations run wild in future planning and the sky is literally the limit!