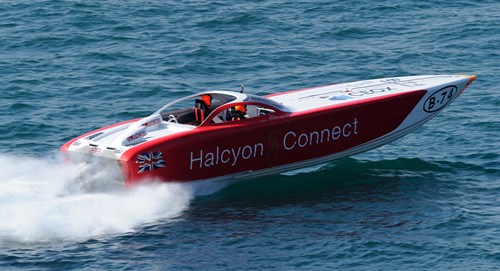 This was the first attempt for Sheppard and Dobson in their Class B boat, entering the ultimate challenge that every powerboat team dreams of winning. The race has run since 1961 and Sheppard and Dobson were presented with the “Beaverbrook Trophy” by the honourable Laura Levi, sister to Lord Beaverbrook.

Speaking from Littlehampton Marina, where the Team runs all its testing, Sheppard said:

“I have always dreamt of competing in this race since I was a school boy. The Cowes Torquay Cowes Offshore Race is the most famous in the world. Growing up, I had posters of all the triumphant power boats covering my walls and now I can add Halcyon Connect – it is truly a dream come true!”

Sheppard, already a Powerboat Champion in his own right, most famously had a ‘close shave’ after barrel-rolling his boat during the British Grand Prix in Plymouth 2006, as widely reported at the time on the BBC and South Today show.

Sheppard and Dobson are long-term friends and business partners at Halcyon Offices, Leatherhead. Halcyon, a BCA Member, offers Serviced and Virtual Offices to SMEs and small to medium businesses. A variety of meeting rooms and a Wifi-Lounge are available to business users at Thorncroft Manor. Halcyon customers can also take advantage of the Halcyon Connect integrated telephony service.