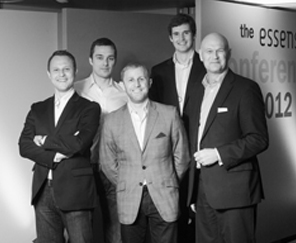 The essensys conference 2012 took place last Thursday, 4th October, in London. Over 150 delegates, including guests from Europe and the USA, joined essensys for a ‘day of inspiration’ at the Grange Tower Bridge Hotel, followed by ‘an evening of celebration’ on the Erasmus Thames River Cruise.

Highlights included Charles Ruffolo’s invigorating session on networking, Benjamin Cohen’s wry look at the past, present and future of the internet, and a truly inspiring session on innovation from Olympian Chris Boardman MBE.

essensys’ Mark Furness, Michael Guest and Bryn Sadler talked respectively about the importance of collaborative consumption to the future of the shared workspace industry, the power of simplicity when selling and delivering ICT services, and how enhancements to JEFF and investment in the core essensys infrastructure will provide even greater benefits to business centres.

Mark Furness, essensys CEO, said: ‘I’m extremely proud that the essensys conference 2012 was such an incredible success again.  Having so many key industry people attend was an enormous show of confidence in essensys, and the positive feedback we have received since the event has been overwhelming. This support genuinely means the world to essensys.  Huge thank you to everyone who attended!’

Mark Furness
essensys CEO Mark Furness began the conference by reflecting on what 2012 has brought to the fore; most notably the force of London 2012, which showed us the power of the network and highlighted the pervasive presence of technology. Furness talked about two key meta-trends; collaborative consumption and the rise of the end user.

Detailing how hyper consumption defined the 20th century, he explained that the 21st century has seen a re-distribution of markets as reputation, community and shared access become essential commodities for success.  Furness told delegates that essensys is fully embracing collaborative consumption, using pioneering technology to redefine traditional sharing and exchange of resources and assets.

Charles Ruffolo
Renowned ‘NetworKING’ Charles Ruffolo enthused the audience with his energetic and entertaining session about the power of networking.  Ruffolo referred to networking as ‘your personal business’ and stressed the importance of building respect, faith and trust.  He outlined techniques for establishing, getting to know, bonding with and nurturing your network; and demonstrated the success of these techniques with examples from his personal experience.

Justin Harley
Justin Harley talked about the huge impact generation Y is having on corporate workplaces, and what this means for the future of shared workspace providers.  Referring to the growth of co-working, Harley explained that this ‘consumerisation of workspace’ means providers need to find smarter ways to sell space.  He identified the ample opportunities for shared workspace providers to capitalise on co-working becoming more commonplace, and stressed the importance of strategy and systems when doing so.

Daniel Proctor
Daniel Proctor addressed misconceptions about leasing, explaining that is not an alterative form of borrowing money and that it will only prove expensive and onerous when used incorrectly.  Proctor explained that leasing is ‘a model for having the use of an