Computer Still Says No: What Happens When Tech Fails? 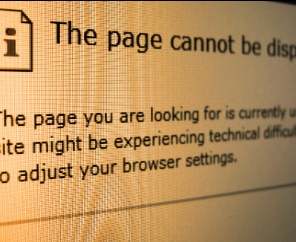 We live in a world of technical gizmos and mobile devices, where we're switched on and connected every waking minute. But what happens when it all goes wrong - and technology fails at the crucial moment?

For those who remember (and love) the comedic sketch from TV series Little Britain, in which a bored computer operator refuses customers' requests because the "computer says no", it's a useful reminder that we live in a world of people vs technology. And technology can beat us at the most inconvenient of times.

We've all been there - the PowerPoint presentation that failed to load, the dead smartphone battery, the lost Wi-Fi connection. Technology has revolutionised the way we live and work and as a result, we are becoming increasingly reliant on it. And now in today's age of mobile working - whether it's squeezing in an hour's work on the train or catching up on emails between meetings - we are placing even greater emphasis on technology as a tool for connectivity.

So what happens when the "computer says no"?

The best way to protect yourself against technological meltdown is to prepare for it. After all, prevention is better than cure - and unless you're a technical whizz who can solve Wi-Fi issues or revive your laptop after the 'blue screen of death' - you should always have a Plan B. And even IT gurus need a Plan B from time to time.

One version of Plan B is that if one device fails, switch to another. The growth of technology and mobile devices means that most of us now carry more than one device. Many business users have an arsenal of mobile devices such as a smartphone or two, a tablet, a notebook and/or a laptop. Research suggests that the typical wireless user now owns 1.5 mobile devices - and this figure is only set to rise. So if you carry more than one device in preparation for a presentation or a pitch, it won't hurt to save multiple copies across your devices. And DON'T forget your chargers.

On the topic of 'backing up', this is still as relevant today as it has always been. It's the best way to protect yourself against technical failure and thanks to new back-up techniques such as cloud storage, there are more ways than one to beat technical failure. For instance if you're carrying important documents on your laptop and it crashes at the crucial moment, you can use another device to access the same documents online. Flash drives are still popular too - and it won't hurt to create a third back-up copy on a portable USB key.

In the face of technical failure, there is no hard and fast solution. The best advice is to be prepared: always carry a charger with you, have a back-up device, make multiple copies, and remember to test everything. And then test it again. You can never be too prepared, especially if your business, your reputation or your sanity is at risk.

And of course if the worst happens, you could always resort to pen and paper...

How has technology let you down in the past, and how did you cope with it? How do you protect yourself against technology failures now? Share your stories below.