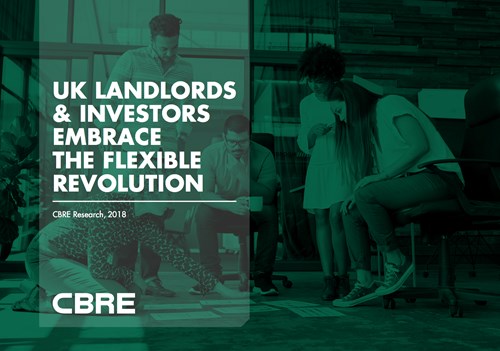 CBRE’s recent report UK Landlords & Investors Embrace the Flexible Revolution explored the reaction of the landlord community to the tidal wave of demand for, and provision of, flexible office space in the last three years.

In 2018 that surge across UK cities has continued.

Serviced offices, and more recently co-working facilities, have long been a part of the UK office market. However, there has been a marked surge in demand for this type of space in recent years and increased take-up from operators of it.

In the first six months of 2018, the surge of demand for such space in the wider South East and regional office markets has continued. For example:

As our recent survey shows, owners of ‘traditional’ office space accept that the flexible office trend is here to stay, even though it may be in its teenage years.

Responses from landlords will depend, amongst other things, on scale of business, experience and expertise, locations and specific assets owned. We find that their eyes are now wide open to both the threats and opportunities posed by growth in the flexible office sector.

Read more on this topic here.