Budget 2012 Highlights from the BDO 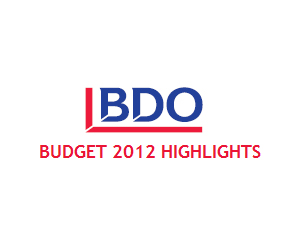 The key themes for Mr Osborne's third Budget, the clearest product to date of coalition politics (and also the most leaked) was the simplification and modernisation of the tax system and the removal of barriers to the UK's competitiveness. He also warned of dire consequences for undertaking "morally repugnant" aggressive tax avoidance.

Mr Osborne demonstrated this commitment by further reducing the mainstream rate of corporation tax, doubling the qualifying limit for EMI share options, and starting to reduce the income tax burden on entrepreneurs. Further, in a bid to develop the UK into Europe's technology centre, he announced targeted tax incentives for digital content, in addition to R&D and patents, alongside further investments in superfast broadband.

“Many of the Chancellor’s Budget measures were leaked in the last week or two but there are some important new announcements embracing both increasing and decreasing taxation for individuals and businesses.”

Stephen Herring, Senior Tax Partner, BDO LLP continued: “Although the proposed General Anti Abuse Rule (GAAR) is also targeted at individual tax payers, the consultation and the resulting legislation over the next 12 months will be keenly followed by business. It is imperative that GAAR is properly targeted at abusive tax avoidance schemes and does not reduce the scope for legitimate and genuine tax planning, which all business ought to consider.”

“We predicted and very much welcome the reduction in the corporate tax rate to 24% from April 2012, 23% from April 2013 and 22% from April 2014. We trust that this is a pre-cursor to an ultimate target of a 20% tax rate at the end of the parliament, which is vital to UK plc as global corporations focus on the headline rate of corporation tax when considering where to locate new business activities. It is imperative that the UK stays ahead of the curve in attracting foreign direct investment and thereby creating much needed employment opportunities.

“Thankfully, the Chancellor has not made business pay a price for the lower corporation tax rates by further reducing capital allowances, which now approximate to economic depreciation in most cases.”

“The jury will be out on the proposals for a new system of taxation for very small business (with a turnover below £77,000) based upon cash flow. Reforms such as this invariably mean well, but can also create unforeseen glitches and anomalies in the tax code, particularly where a business’s turnover increases from just below the threshold to just above.

“The majority of these measures are favourable to most individual tax payers and businesses, but understandably will not be welcomed by the very small number of people who wish to indulge in overtly abusive tax avoidance.

“We welcome the proposals for a new personal tax statement from 2014/15, which will remind tax payers that there is no such thing as government money or public funding, only taxation receipts.”