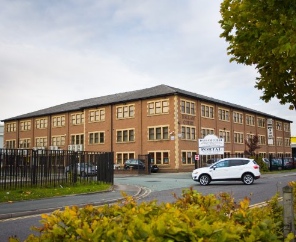 The BCA turns its attention to Cheshire, and finds that while flexible workspace performance is encouraging, the region benefits from a diverse business community that's encouraging growth within the sector.

Following on from the BCA's recent report on UK business optimism, in which we reported on a general warming of business confidence and the positive impact this is having on the UK's flexible workspace sector, the BCA is continuing its 'cautious optimism' focus with the region of Cheshire.

In recent months, reports suggest that businesses, and particularly those based overseas, are turning towards the UK's regional cities in order to cut costs and gain greater access to other parts of the country.

Manchester, arguably the UK's second city, is one such location that's attracting attention from SMEs looking for a cost-effective location. But what of the north-west's homegrown businesses? And is this attention translating to greater performance for the Cheshire region?

Based on research across a number of flexible workspace operators in Cheshire, the BCA has found that parts of the region are indeed experiencing an uplift in both workspace demand and take-up. While it is a relatively lukewarm performance rather than a strong upward trend, it should be taken as a positive step given that many UK regions continue to battle below-average rental values and weakened demand as a long-lasting legacy of the global recession.

As for specifics, Portal Business Centre in Warrington reported growth in occupancy levels from 73% to 95%. Overall, enquiries this year whilst down on 2012 viewings have increased, and the company reports that conversions have jumped significantly.

Furthermore, Portal reports an increase in demand for larger workstations - notably, compared to the 1-3 man spaces requested last year, over the last six months the company has found that businesses are requesting more 4-6 workstation spaces. It has also responded to demand for greater flexibility by expanding its hotdesking and shared space facility, leading to a "marked increase" in the number of enquiries and conversions for this environment.

The Warrington location of United Business Centres (UBC) experienced a 14% growth in enquiries in Q1 this year compared to the same period in 2012. UBC started 2013 with a "very strong" January and February, but reported that March enquiries dropped off year on year.

UBC's Warrington location has also seen a 10% increase in occupancy levels during Q1 2013 compared to 2012.

According to Jane Erasmus, Regional Sales Director for UBC, much of this trend appears to be from home-grown businesses and existing clients. "We're seeing more of our existing clients expanding in 2013 than the previous year," she said. "Move-ins have tended to be local business moves from other parts of the borough, rather than new inward businesses to the area."

"Our statistics for Chester and Stockport show a 15% increase in enquiries in the last year, and the number of lettings is currently identical for the same time frame," the company reports.

Again, similar to UBC, internal movements seems to be a major factor in the company's north-west performance. Specifically, their Stockport location has seen 12% of existing clients expanding within their centres, and 8% of clients expanding in Chester.